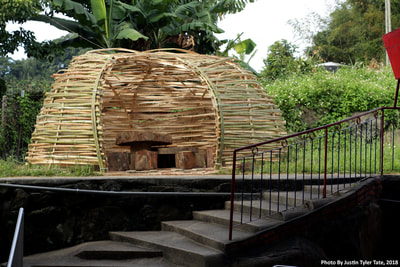 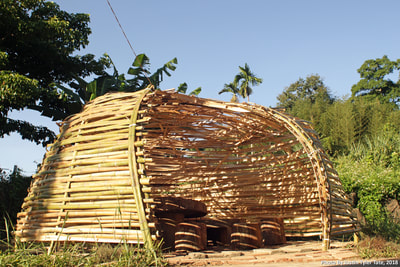 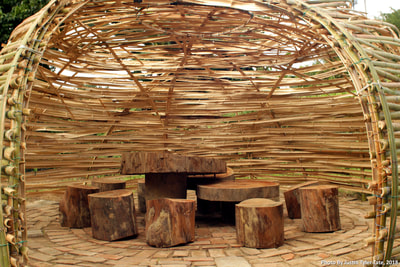 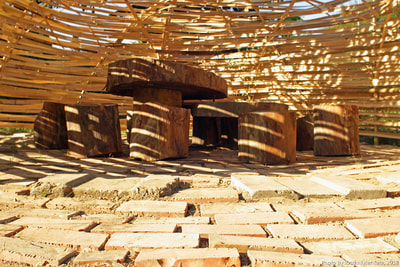 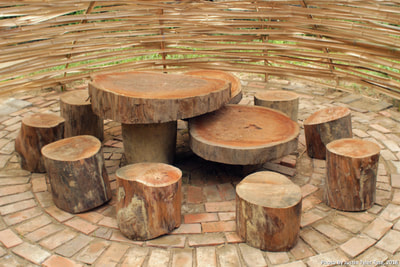 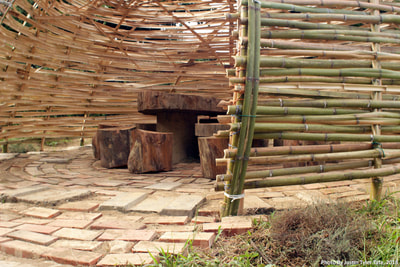 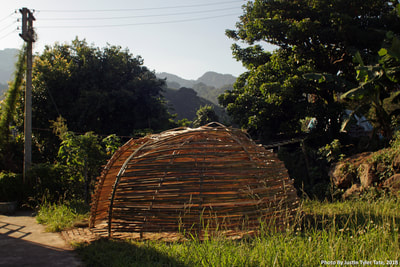 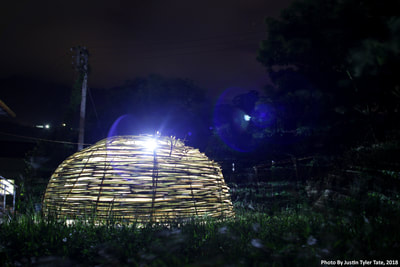 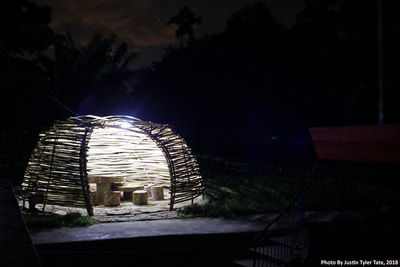 Island​ is a site-specific work designed and built at Dongxing Elementary School in Dahu, Miaoli, Taiwan. The work’s intended function is to be utilized as an outdoor classroom which encourages a non-conformative approach to learning, as well as teaching, through the non-hierarchical format imposed by the process of construction, the layout of the interior space and the unusual ways in which the local materials have been used.

Island’s foundation is a floor of reclaimed bricks which have been set into the ground in a circular pattern with compacted soil between them. The bricks surround three wide logs which, also set into the ground, are topped by three even larger slices of trees and nailed together with several pieces of steel rod, to form a multi layer table in the center of the installation. Several unfinished log cuttings have been arranged around the center table to form seating for up to 10 individuals. Enclosing the space is a dome made of woven bamboo strips. The center of the dome’s ceiling has a reused LED strip formed in a circle for illuminating the space at night. Surrounding the structure are several rosemary and thyme plants which release their aromas into the air as the wind blows their branches against the bamboo structure. The natural, fluid and honest approach to the use of materials in the construction of Island contradicts common architectural styles in an ecological and playful manner.

The work was constructed over seven days, during which students were able to help in the construction as often as they wanted between and occasionally during class time or after school. This participatory approach to the installation’s construction allows for a distributed sense of ownership between students and artist alike. As students removed the grasses from the site, dug into the soil, laid bricks and other activities contributing to the finalization of the work, the disused land behind the school became a learning environment where play, experimentation, social relationships, ecology and labor came together in a singular process. The work’s title comes from the day of the work’s opening when a few students said “let’s go play at the island”, referring to the installation, thus naming the work.

The work’s intention is that it will become a site of inquiry-based learning where an alternative curriculum can be infused into the rest of the educational programs and where the curiosity of students can be encouraged as fundamental to their development. The circular format of the seats and table infuses the space of the installation with the possibility that students and teachers can be equal in terms of their social dynamic, gender and authority. Island is neither solely art, architecture or furniture but exists beyond such strict definitions. Through the combination of materials, process, as well as its final realization, the work manifests a hybridized environment where pedagogical, architectural, ecological, playful, experimental, and dialogical processes converge into a singular space.

Island was designed and constructed by Justin Tyler Tate in Dahu, Miaoli, Taiwan
​with help from the students and teachers at Dongxing Elementary School as well as support by RTM and 小田農創.
Powered by